Lulu M. Stanley, 99, of Glenwood, Iowa, formerly of Thurman, Iowa, entered into eternal rest on Sept. 29, 2005 at Tabor Manor. She was born October 9, 1905 in Fremont County to Fred & Alice (McAlexander) Buhr. Lulu was united in marriage to Jack Stanley on Sept. 6, 1927 in Council Bluffs, Iowa. To this union three sons were born, Don, Jim and Brooks. The family lived in Thurman for many years, where Lulu was an active member of the Thurman United Methodist Church. She and Jack relocated to Glenwood in 1980.

Lulu transferred her membership to Grace United Methodist Church, and was a member of the following organizations for many years, Glenwood Library Board, Pythian Sisters, Garden Club, Eastern Star and she enjoyed playing in many bridge groups with friends. Her grandchildren shared that they will forever remember the aroma of the delicious cookies and desserts that Lulu prepared just for them. Lulu and Jack had a winter home in Florida, where they would invite their grandchildren two at a time to come and visit for a week. Once they arrived, there would be trips to the beach and Disney World. They had countless vacations in the Ozarks together and Christmas Eve was always a highlight when the entire family would gather at Lulu and Jack’s home. 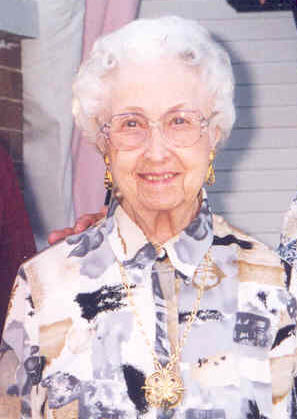