William (Willie) John Henry Roof, age 80 of Glenwood, Iowa, died in his home on Monday, April 5, 2021, due to cardiac causes. Willie was born on September 21, 1940, in Red Oak, Iowa to Alonzo Roof and Doris (Mertz) Roof. He was married to Kathleen Gayle-Roof-Fleener with whom he had 3 children; Stacy, Korinna and Lonnie. He later married Mary Castaneta-Roof with whom they had Jason. Willie joined the Marines in 1959 where he became an E-7 Gunnery Sergeant. Throughout his 20-year career as a Marine, he served in Vietnam for 1 year, earned Marksmanship Badges for both Pistol and Rifle, received the Vietnamese Cross of Gallantry w/palm, 6 Good Conduct Medals, the National Defense Service Medal, the Vietnamese Service Medal and the Vietnamese Campaign Medal w/device. He was also a certified scuba diver and could operate a locomotive.

After Willie’s retirement from the Marines, he worked from 1979-1984 for Bechtel Power Corporation in San Clemente, California, where he started out as a field assistant and technician and later became a construction assistant. After leaving Bechtel Power, he became a warehouse manager at Arnold’s Interiors in San Marcos, California. Willie officially retired in 1987.

Willie was a man of many interests. He loved fishing with his brother Bob, going to stock car races in Corning with his brother Frank and watching and cheering on his beloved Iowa Hawkeyes. Willie’s sense of humor, laughter and love for fun experiences will be missed by all that knew him. 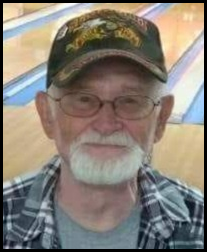