Leora Ruth Foster was born on November 25, 1927, at Mercy Hospital in Council Bluffs, Pottawattamie County, Iowa, to Raymond Milford Foster and Opal May (Maxwell) Foster. Leora passed away on April 10, 2021, at 93 years of age.

Leora Ruth weighed 3 3/4 pounds at birth and was believed not to be breathing until one of the nurses saw her move a finger. She was put in an incubator and was hospitalized for over three months before gaining enough weight to go home. Her mother, Opal, was also hospitalized for most of that time because of uremic poisoning which caused temporary blindness.

Leora spent most of her childhood years in Bartlett, Iowa, and attended the Bartlett School through eighth grade. During her high school years, she attended school at Thurman, Glenwood and Tabor, graduating from Tabor High School in 1946. Many of her high school classmates started calling her “Lee” instead of Leora, which she did not like, so she made herself known as “Ruth” to her family and friends.

Ruth married George Aubrey Garrett II on January 25, 1947, in Council Bluffs, Iowa, and they had three children: Janice Ilene Garrett, Calista Elaine Garrett (died at birth), and George Aubrey Garrett III. Ruth and George lived in Mills County until the Spring of 1960, at which time they moved to Bartlett, in Fremont County, where they owned and operated the Bartlett Auto Company. Ruth was the bookkeeper and managed the office for the family business. After George’s death in 1969, Ruth sold the business in Bartlett the following year, purchased a home in Tabor and began employment at the Tabor First State Bank as a bookkeeper and teller.

On December 31, 1970, in Glenwood, Iowa, Ruth married Jonathan C. Rhode of Tabor. Ruth and Jonathan enjoyed spending time together on summer vacations, took pride in hosting holiday meals for the family, and entertaining the grandchildren. After working twenty-eight years at the Tabor First State Bank, Ruth retired in 1998. Jonathan passed away in 1999 after a long illness.

Ruth was baptized in the Christian faith on February 7, 2001 and was a member of the Bartlett Community Church in Bartlett, Iowa. Ruth was also a charter member of the Tabor VFW Auxiliary. Ruth entertained herself by solving word search puzzles and listening to her police scanner, particularly the areas of Fremont County and Mills County. In the mornings, Ruth liked having Jimmy Dean breakfast sandwiches, ate Milky Way fun bars and drank Diet Dr, Pepper throughout the day which she shared with the grandchildren and great-grandchildren. Ruth was very devoted to her friends and family and was a good listener. She had a heart of gold and was willing to give a helping hand to those in need.

Memorials may be directed to Glenwood Volunteer Fire Association or Tabor Fire and Rescue. 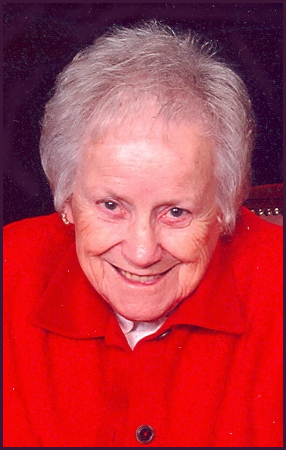